Ladies and gentlemen…if you ever need a personal investigator to find someone…give this girl a call…my Sister Laura….

There ain’t no-body she can’t find.
So today we both had tickets to see The Tenderloins in Manchester. They are the four guys who star on Comedy Central’s “Impractical Jokers”. We were in for the 6pm show. Laura finished work at 11am so we headed straight over to Manchester. After realising the Box Office at the Academy (where we needed to trade our e-tickets for physical one) wasn’t open until 4pm we needed a way to kill time.

So Laura said “let’s go to the Lowry Hotel”. She’s stalked celebs there loads of times. So we headed there and after paying £12 for a bottle of beer and a Diet Coke we chanced not staying there and having to re-mortgage the house for another drink.

…and this is where things went mental. So a random woman tweeted a photo of herself and her fella with three of the Tenderloins :

And we were tweeting her saying “where is this???” When Laura suddenly says “found it!”…she had Googled the red chandelier thing in the background and found  the hotel in Manchester that the photo was taken…absolute skills!

So we jumped in a taxi and headed over there…still dubious that it might actually be right.

We’d been in the hotel (which I won’t name out of respect to the guys) for two minutes and Q and Joe came out into the reception. We quickly asked Joe for a photo and he was lovely about it.

We missed Q as he was on the phone and left the hotel. A while later Sal came down into the foyer and we accosted him too :

We waited a while in the hotel and Q came back through so we grabbed him for a picture and I told Q that Laura had a crush on him…he said she obviously had good taste!

So that left us waiting for Murr…who just wasn’t coming down…Joe said he would give him a nudge for us…and it was getting close to the time we needed to leave to get to the venue. Luckily they were all getting a taxi and Murr finally came down and we met him too :

A full set of Jokers!

We headed to the show and managed to get sat 5 rows from the front. It was a brilliant show. So hilarious. They tell some fantastic stories and anecdotes as well as showing unseen footage from the show!

I would highly recommend the show to anyone!

Until Next time! Thank you Jokers! 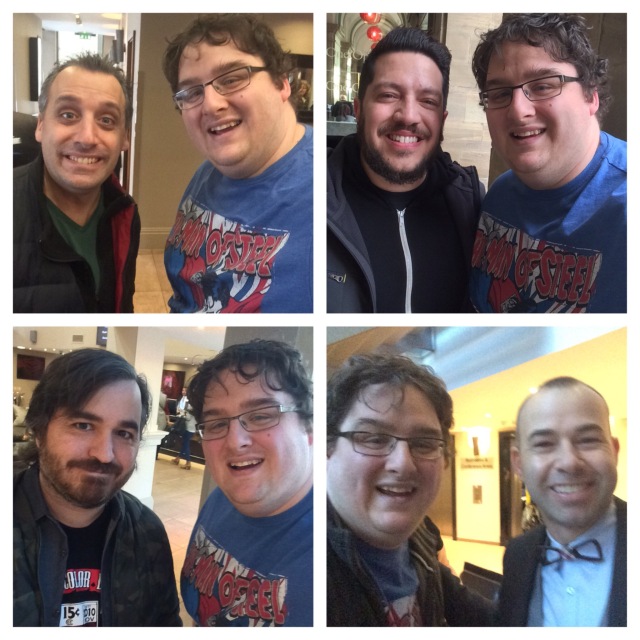