Prior to running Manchester’s 2.8 Hours Later Zombie Run Game yesterday (Saturday – Click here to read about it) we decided to get into the Zombie mood by going to see the brand new World War Z.

Now…here’s my first question…is it World War “Zee” or “Zed”? Being English, we should really say “Zed” but I just cannot bring myself to say it…it’s clearly a play upon World War 3…so for me, it will stay that way.

And to the film…its the age-old Zombie tale. Someone somewhere has been infected, but that has led to the entire world being plunged into a Zombie Apocalypse. The fast-running brain-eating nutters are killing and breeding at a massive pace. Brad Pitt plays the lead, taking himself on a one-man mission to figure out what the hell is going on. His journey takes him to the middle east where he learns the virus started. There is a massive invasion there which is pretty impressive, and CG at it’s finest.

But the whole entire film just lacks something…or maybe it’s a case of having too much of something. My problem with this film is that the budget is just too massively big. Zombies work better when the production is scaled down. The film is just too big.

Also, the action seems to leap around too much. One minute we’re in one place, the next, Pitt’s somewhere overseas. Surely if something as massively mental as a full-world Apocalypse hits, then we wouldn’t have commercial air flights taking place…which also lends itself to one of the silliest scenes in the film. Forget your Snakes On A Plane…this is Zombies on a plane…which again is an insane concept…as during the film it’s stated that it only takes 8 seconds to become infected…so how did someone who was infected manage to get through check-in, board a plane, wait for it to taxi and take-off before turning and causing carnage?

“That’s it! I have had it with these motherfucking Zombies on this Motherfucking plane!” Ah, Samuel L Jackson would have been awesomely placed in this.

Overall, the film offered so much in terms of hype, but it falls well short in a Genre dominated by lower-budget, smaller-based action. 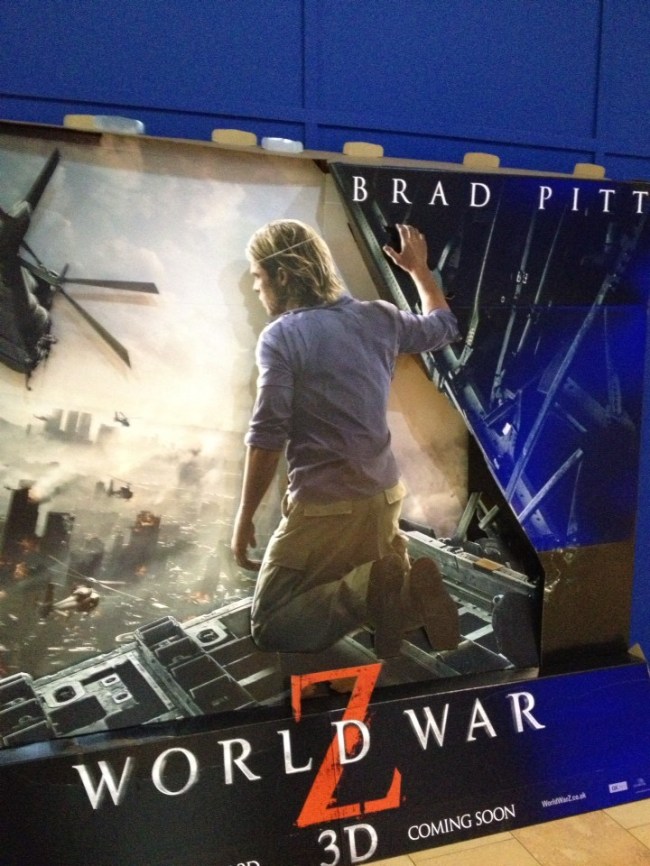 Like Loading...
This entry was posted in Uncategorized and tagged AMC Manchester, Brad Pitt, cinema, David Morse, Dawn Of The Dead, Day Of The Dead, Film, icheckmovies.com, Movies, Shaun Of The Dead, World War Z, Zombieland, Zombies. Bookmark the permalink.