Woke up full of the joys of spring this morning, no hangover or anything, which was massively surprising following the amount we drank yesterday.

Went down for Breakfast but I couldn’t really face food so didn’t bother eating much.

It was time for outfit number two :

A 16-seater picked us up to take us to the Adrenalin Jungle adventure centre. The centre was about 4000 miles away! We got there early due to the fact that the taxi company had asked a couple of days ago if they could come earlier for us. It resulted in us having a wait around at the centre before getting into our activities.

When we finally got our turn we went down to do the archery which was brilliant. I actually was quite good at it. Our team walked all over team two! We were just too damned good. Afterwards we pinned the blow-up sheep to the target and had one arrow each. Crooksy nailed it straight through the eye!

We then had a change around. My team went to do the Team Construction first. It was funny. We basically had to transfer some water from one end of the course to the other. We had to walk across some bars without falling off and then moved the water from buckets into a tube and then move a ping pong ball to another tube. It was really good fun and after spending AGES not knowing what the hell we were going to do we cracked it. We then moved to play a Helicopter Game where we pulled strings to move a helicopter to pick up discs.

Then we swapped activities. It was our time for Blindfolded 4×4 driving. That was great fun. One person driving and others stood either side directing where to turn the wheel to go around a slalom course through gates. Had to love Rob’s directing : 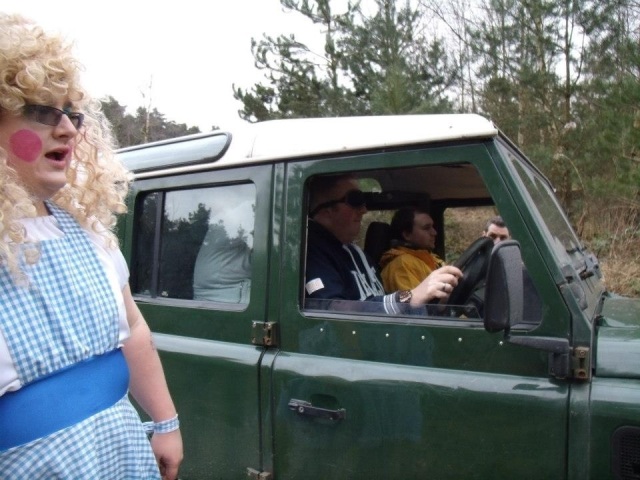 Our team walks absolutely everything and we won easily, which was good as we gave the rest some stick.

Then I made a fuck up…I had booked the taxi for 5…but we finished at quarter to 4 so we had to wait around for an hour until the taxi coach turned up! Oops!

Got bam to the hotel and was given my third outfit for the night :

And off to the dogs we went.

I did 5 & 6 in a reversed forecast all night. Was looking grim until the fourth race, the one we had Sponsored a “Big Dave’s Stag Trophy” and 5 & 6 came in bagging me £37. We also had a trophy to award to the winning owner which was funny

After the dogs we went back into the centre of Nottingham but I only lasted a couple of drinks before flaking out and going back to the hotel. It had been a looooong day and last night had been pretty mental!

Like Loading...
This entry was posted in Wedding and tagged Adrenalin Jungle, Nottingham, Nottingham Dogs. Bookmark the permalink.