Amidst the election of Barack Obama to the US Presidency, America was on the brink of financial ruin and the strain was felt from the top of the government all the way down to the little men, the gangsters and the criminal leaders.

Killing Me Softly follows the event surrounding a small area of America and the spiralling problems of small time gangland killings. Brad Pitt stars as a bounty hunter, drafted in to take care of a problem which arises following the robbery of a bunch of criminals by another gang.

The whole affair needs to be cleaned up and Pitt’s ruthless killer is the one tasked with sorting out the problems at hand.

Dialogue is the major driving force behind the film, using strong Tarantino-esque one-on-one chats to drive the film along at a fairly slow, but highly interesting pace. Throw in some very sublime slow-motion action and what comes out at the end is a slick but gritty film which deals with lowlifes in a unique way. Great cinematography and dialogue all combine into a thrilling piece of cinema.

If you’re looking for fast-paced action, this is not for you, but if you’re a fan of dialogue driven stories, then be sure to check this out. 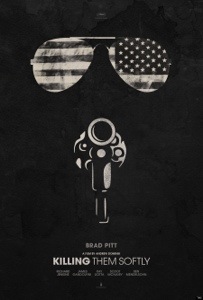 Like Loading...
This entry was posted in Movies and tagged Brad Pitt, Cineworld, Killing Them Softly. Bookmark the permalink.

1 Response to Killing Them Softly