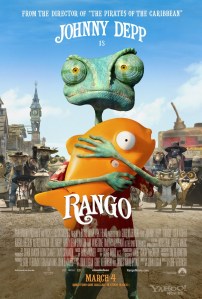 Animated films can be a little hit and miss. The Toy Story trilogy and Shrek have been massive successes and have brought adults as well as kids into the multiplexes to enjoy. But with the passing of Toy Story 3 closing out that set of films and Shrek seemingly having run its course, the way was paved for a new kind of Cinematic Animated hero…step up Rango.

The story is a simple one. Rango is a pet chameleon (voiced by the versatile Johnny Depp) who is accidentally thrust from a moving car and into the middle of the desert where he stumbles across the wild-west town of Dirt. A town with no law and order and in desperate need of help.

The delight of Rango is that it’s not really for kids. Adults will find a lot in there to keep them entertained, not least in the opening 2 minutes when Rango hits the front windscreen of a car, it’s clear that it’s the car of Johnny Depp’s character from the movie “Fear & Loathing in Las Vegas”, an ironic piece of foreshadowing.

As Rango is made Sheriff of the town through a series of unfortunate events, he embarks upon an adventure to help reclaim the town’s water supplies.

Rango is Industrial Light & Magic’s very first animated feature and the effects really hit spot on. The visuals are quite possibly the greatest visuals I have ever seen on the big screen and sometimes you can actually lose yourself in the scenery and  forget that it is animated. Some of the animals that Rango encounters are also amazingly cute and ugly depending on which one you are looking at.

The plot however fails to deliver. It’s a simple plot which just doesn’t inspire a second viewing unfortunately. The set pieces are amazing and the Valley Chase Scene is one of my all-time favourite moments but it just doesn’t help the story along enough.

All taken into consideration, Rango is worth a watch at the cinema just for the amazing visuals that will probably lose a lot of their jazz when on a smaller screen, but be prepared for a lumbering storyline which doesn’t help the movie on it’s way to becoming the new era in movie-making.