LA Dodgers won last night (yes I know it was technically yesterday but I wrote my blog before watching the game) which is always nice.

Shame the same couldn’t be said for Leeds United who made the trip to Leicester for the first away game of the season. The game was on Sky but it was quite possibly one of the most boring games ever. Very limited chances. A lot lost in the middle of the park. We are majorly missing some wide players….but Max Gradel tweeted this earlier : 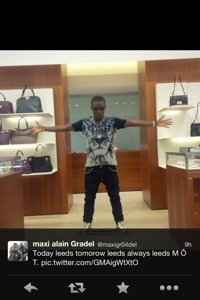 Could he be coming back?

The Leeds game ended 0-0. I had to piss a couple of people off on my prediction league too. I have always said that all predictions must be in an hour before Kickoff. When it got to Half 3, I posted saying predictions were closed. In the next few minutes, two people predicted! I refused to let them in. The rules were there for a reason as the team sheets are announced, and one hour before gives me enough time to put the spreadsheet together before leaving the house on a Home match.

Dragons Den was back tonight too. Love the Dragons! Two newbies in the chairs too replacing Theo and that shoulder-pad woman. It was quality as always.

Tonight, the Perseid Meteor Shower was in the sky….I started looking during clear skies. But then a HUGE cloud came over. Game over!