It was the First Direct Family Fun day today. Got Megan ready and hopped into the car…only to hit traffic on the way and turn a 1hr 15m drive into a 2hr 30m one. There were some idiots out and about too. All very annoying.

Met Amy, Tom, and his kids at the main gates when they got there. Dumped our stuff at the First Direct tent and headed out. Megan and Ollie hit it off straight away and headed into Little Monsters. Amy rode with Ollie, Elle rode with Megan and I had to go on my own…this is how terrifying it was :

Megan and Ollie went on loads of rides together.

At one point, I even went on a roller coaster but wasn’t strapped in!!! Yup one of the kids rides and the bar wouldn’t come over my knees but the fella said I would be alright. I was actually scared!

Came home and got ready for a fancy dress party we were going to. Originally I was breaking out the Superman Onesie with my new cape but it was just too warm….so Dorothy made a re-appearance from the Stag Do.

Amy and Elle went as Wally and Tom went as a cheerleader. 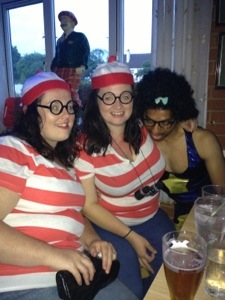 Also posted a surprise Minion Picture Of The Day. We’d done it at the same time as yesterday’s but didn’t want to post two in a day…