Well that’s it. We landed about half an hour behind schedule which wasn’t too bad really after a bit of a wait in Vegas after they wouldn’t let the pilot onto the runway for 45 minutes.

Picked up the baggage and found the phone to ring Bewleys who sent a shuttle straight out. Went back to the Bewleys Hotel and picked up the car. What a fantastic service they provided. Highly recommend using them in the future.

One thing I did notice on the way home….how bad our roads are for driving on! The Americans have it absolutely nailed on. I think the fact that over there, Undertaking is legal makes everything easier because you can just stick in one lane if you want and not worry about anything. Over there, they also have a “slow vehicle only” lane which makes sense when you’re on the motorways.

Stopped off for a Burger King (to wean ourselves off slowly) but their boiler was broken so ended up getting a Greggs.

Got home and amongst the post I had a letter from the Queen (well her Lasy In Waiting)! Back on 18th March I wrote a letter to Buckingham Palace after “Our Queen” the documentary had been on (see Blog post by clicking here) and I had this letter back from the Palace! 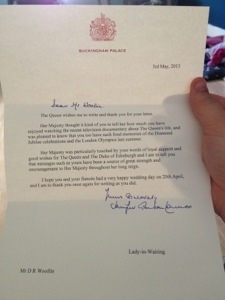 So that’s two letters from Buckingham Palace, which is nice.

Was pleased to see that the Sky+ wasn’t full. Amazing. And some things we’d actually already managed to watch either on the Mini-Moon or on the Honeymoon itself online. Good times.