Well it was time to say goodbye to Pismo Beach today and make the journey the whole 400 miles back to Las Vegas. As the wildfires were continuing down the 101, preventing us from taking the longer, but easier route back almost to LA then back to Vegas, we looked into another route. It was direct to Vegas but was a bit up and down and smaller roads….but it was actually a much calmer drive.

I mastered the Cruise Control so just kept it set to the speed limit and all was good. It was a much more relaxing journey without having to weave in and out like we were doing on the freeway.

We went to Peggy Sue’s Diner again which was awesome and made good time and got back to Vegas around 3 only to find out that we’d actually been charged for the “Upgrade” we’d been given on the car. Not happy. Will be kicking off about that soon.

Jumped in a taxi to the Venetian. We were given a luxury Suite which was lovely….the only problem being or Elle that it was 28 floors up and she was convinced the building was moving! Bless.

We watched our Elvis Wedding DVD in the hotel as there was a DVD player. It’s really funny.

We then went down and had an outside Gondola ride, just the two of us, around the canals at the front of the hotel. It was lovely. The girl who was taking us was a great singer too. 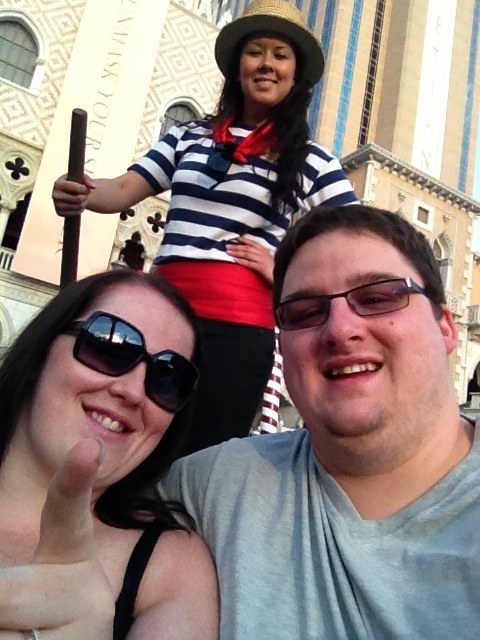 Then we ha a little gamble in the casino. Elle won $30 on Deal Or No Deal but lost it on a Unicorn game that we were dragging out for free drinks. Haha. It was a fun night.

Like Loading...
This entry was posted in 2013, 365, Food, Honeymoon In Vegas and tagged Gondolas, Las Vegas, The Venetian. Bookmark the permalink.