Watched an interesting video on the BBC website (Click here to view) about the inclusion of Video Games into the Museum of Modern Art in New York with the viewpoint of asking whether or not video games should be considered a work of art. My thoughts are that art can take many forms and the true thoughts behind “what makes art?” is more a question of “What is art to you?”. For example, I look at a lot of pieces of art and genuinely think Why would anyone want that on their wall or even Who said that’s Art?, one prime example being that unmade bed that Tracey Emin displayed as “Contemporary Art” : 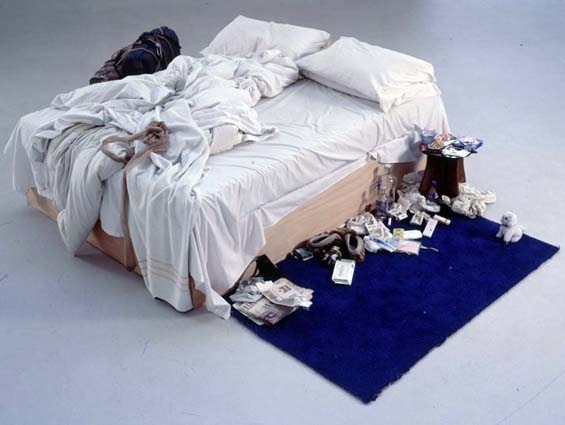 To me…that is not art. But check this out…check the symmetry used on this image :

Art is inspiring, art puts feelings in your heart, whether warm or cold, and art doesn’t make you think “What the fucking hell is that being classed as art for?” Like Emin’s skanky bed.

If someone opened a National Games Museum, with hands on approaches to the most loved games across the years, with behind-the-scenes looks at development processes and concept artwork, I would 100% spend hard earned money to go look around…but offer me a ticket for free to an arty-farty gallery and I would have to think twice about whether I could be arsed to look at pompous crap that someone else is telling me is Exquisite and Contemporary.

Tonight, Leeds United needed to beat Leicester in the league. Leicester who constantly prove to be a set of bastards who will do us over at any given opportunity, a set if bastards who love to spoil our fun…and tonight was no different.

All was going well. 0-0 at half time, and early in the second the Tweet updates from Phil Hay from the Evening Post read that Byram had out Leeds in front…and all it was going to take now was holding on until the end of the game…which we did………until about five seconds from the end of the game when we let an equalizer in…made worse by the fact the kid who scored it is only on loan from Scum!!!

So another two points dropped, and some results around us were going our way too. It would have been a perfect opportunity to gain on the Playoffs but in typical Leeds United fashion we went and fucked it up…it’s somewhat of an art form in itself…!

Organised a couple more things for the wedding today too. Everything coming along nicely now. 6 weeks and 4 sleeps until the big day!

Heard an interesting story today that Justin Bieber turned up 2 hours late to a concert and ended up making loads of fans miss their transport home after…I am sensing the start of the downhill spiral…I expect he’ll publicly shave his hair off soon and sign up for the next series of Celebrity Big Brother.