Had a mega Celebrity Big Brother catchup, watching about 5 episodes back to back, including the finale. One thing to come out of this is that Rylan is a really decent bloke who stands up for what is right in the house. Spencer and Heidi are complete pricks who need to get a proper grip on reality. They have some moments when they seem genuinely nice and then they flip into arsehole-mode. Razor Ruddock has been brilliant too. Very genuine and funny.

It was a very deserves win for Rylan in the end.

Went to the John Charles Centre for a swim tonight. It was the 50m setup and did a mile in 45 minutes which was a minute quicker than last time so that’s encouraging. Need to really keep up with it.

There was naff all snow after swimming, we’d had a little flurry so I thought that was it. As we were say watching TV, Lawlor text saying he had a shitload of snow, and we said we hardly had any….and then we opened the door…and we had around 6inches at least! It’s still falling like crazy. Thi was the view around 9pm : 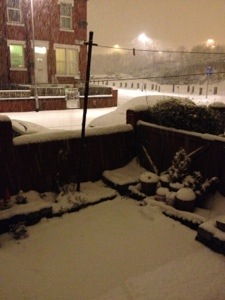 Just feel a little bad because we haven’t been panic buying at the shops…what will we do??? How will we survive???

We Skype’d Lawlor for a bit until he had to “Do a Rod Hull” and go clear snow from the Sky Dish to get it working again.

The latest Leeds United news in the last day or so has been the big Luciano Becchio news. He handed his transfer request in after apparently having his head turned by a couple of foreign clubs who have made an approach for him. Leeds have turned down the offers but he is looking to earn more money and not the kind of money Leeds are willing to offer him unfortunately. These things happen in football (especially at Leeds) and I think the writing is definitely on the wall for Becchio’s imminent departure. Personally I would love him to stay. He seems to love Leeds and playing for us, but at the end of the day if you were in a job and could go somewhere else for double the money to do the same job…you would.

Apparently we’re meant to be getting Gradel back too…but we will see that when it happens….no doubt we’ll pay more than we sold him for…it’s the Leeds United way!

As I have been typing this, on and off or a few hours, the snow has really piled up outside… : 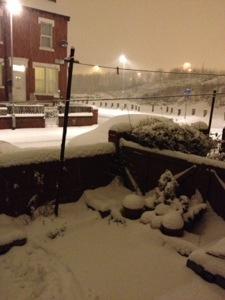