News broke recently that Arnold Schwarzenegger, fresh off the back of his Governor gig, is set to make his movie-comeback with a return to his most famous role as The Terminator in the fifth installment of the franchise.

The Terminator films are an institution and always arrive with a tonne of anticipation. When the new installment is released, it will be 30 years since we were first graced with the famous “I’ll be back!” line on the first leg of a journey with no beginning or end. The story loops from John Connor protecting his mum through him being protected himself by a terminator, through to judgement day, the war against the machines and eventually back to John Connor sending back Kyle Reese to protect his mum.

Ask many sic-fi fans and they will tell you that Terminator 2 was one of the greatest action films of all time.

T3 : Rise Of The Machines was a fairly decent movie in the sense that it was trying to shift a little bit more towards the comedy element that people love from T2 and away from the 18-certificate-box-office-takings-killer that it could have been.

Terminator Salvation was extremely good I thought. It was a really good way to begin exploring the post-apocalyptical world that John Connor knew and the history behind his meeting with Kyle Reese. I am very intrigued to see (because apparently they were going to make T5 AND T6) the movements in the war which lead to John Connor sending Kyle Reese back to protect his Mum as well as ultimately capturing and reprogramming the T-800 to fight on his side for sending back to protect himself (T2’s action)…and maybe even the eventual death of John Connor at the hands of an Arnie-like T-800 and the reprogramming of that exact model to go back to protect them all from the Rise Of The Machine’s aspect! 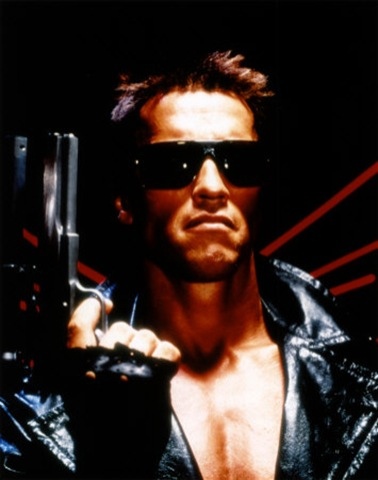