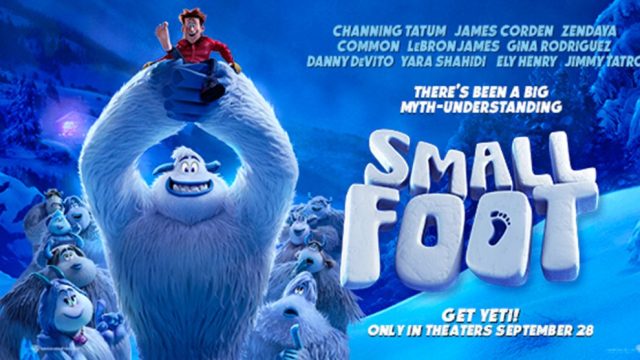 Plot – A Yeti is convinced that the elusive creatures known as “humans” really do exist.

I thoroughly enjoyed Smallfoot. It felt refreshing and well put together. Its animation which works so well. There’s a lot of White throughout in all the scenery, but everything looked massively crisp and clean and perfectly put together.

In a way, it borrowed a little from Monsters Inc, a world of creatures that Humans don’t know about, but the film focusing on those creatures and their struggle to understand the Human world.

Most of the voice acting was on point. It was great to see Danny DeVito back in an animation role too (I am a huge Hercules fan).

The only place I felt it fell down was James Corden’s casting. Much like Peter Rabbit, I struggled to fit his voice in which the character he was portraying. He has a very distinct voice and it just takes you away from the animation and into just picturing James Corden.

Other than that though, this was great. I expect there’s someone somewhere making commentary on race and beliefs and acceptance of cultures into your lives…but if you want just a good old fashioned comedy animation this is it.

It’s silly in parts, but a funny silly. It works well. The Yeti world was spot on, having them running their own civilisation. There’s a moment that really made me chuckle where Migo’s Dad is explaining that he comes from a long line of Yetis who ring a morning gong with their heads. They literally catapult themselves across the town and hit their head into the gongs. They all have flat heads. One of the ancestors was one who “had a stupid idea about a mallet” and is quickly dismissed as the black sheep of the family. I loved it.

Kids will love this, adults will get a good laugh from it too.