Believe it or not, this ain’t a blog about FIFA or any other EA Sports games.

Basically today, I mastered the A & E chords on the guitar. Been using some online videos to learn how to put it together into songs and it’s working a treat. 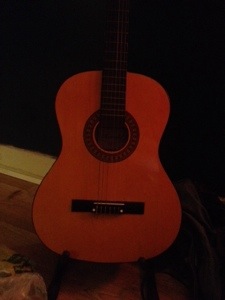 Got used to the A and E major chords and switching between the two of them.

Also got used to strumming in 8ths instead of just sticking to the beat. It’s good to hear the sound coming together now. Fingers are hurting. No pain no gain and all that!

Was playing Silence Is Easy really well and it felt good switching between the chords. I was worried about it before, but now if feels a lot better! Can’t wait for the next stages.

Watched a massive amount of Sons Of Anarchy today. We’re into Season 6 now.

Had a bit of a Facebook rant about Leeds fans being more interested in the exploits of Man Utd than the trials and tribulations of our own team. Started a nice debate.

Like Loading...
This entry was posted in 2014, 365, Football, Guitar, Leeds United and tagged a chord, e chord, guitar, leeds united, manchester united, silence is easy by starsailor. Bookmark the permalink.