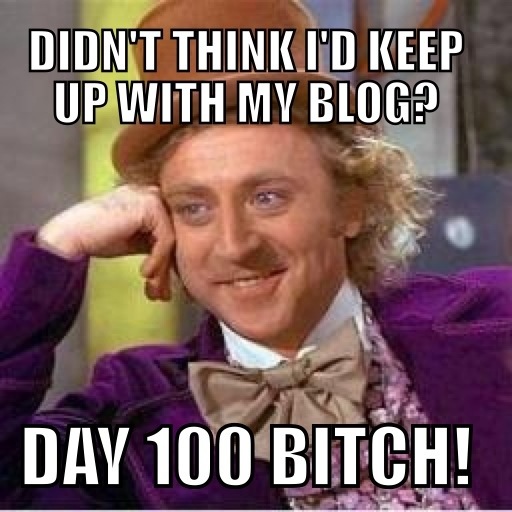 Here we are…Triple figures finally with the 100th day of the year and the 100th blog….yes there’s been some more in between, but for the full 100 days so far I have done my blog…And Lawlor didn’t think I would make it to a month!

It’s been quite an eventful 100 days but the next 28 will be amazing. Coming up in 9 days we have our Wedding, followed by a two night mini-moon, a one-night airport stay and a two week Honeymoon through Las Vegas, Los Angeles and Pismo Beach…it’s gonna be an eventful 4 weeks from here on in.

Today has been quite funny. Following all the chaos of yesterday with everyone posting videos of the Fandango singing/dancing etc, the theme tune has gone into the official charts! iTunes currently has the track at number 11…brilliant…I paid the 99p for it…

It’s also been a day of getting carried away with Meme’s. Here’s a few I fired out :

They made me chuckle anyway.

Elle had an email today from the Registrar for the wedding saying that we hadn’t paid, when we have…PANIIIIIIIC…but luckily they found the money they had clearly misplaced! Great admin you have there Kirklees….

Went to TGI Fridays after work for Claire’s pregnancy leaving do. I had Wings & Ribs to get me into training for Vegas.

Caught up with this week’s episode of The Following which I thought was one of the best yet.

So that’s it. Let the fun next 28 days roll on through and hopefully you’ll be here every step of the way.

Like Loading...
This entry was posted in 2013, Food, TV, Wrestling and tagged Blog 100, Fandango, Meme. Bookmark the permalink.